skip to main | skip to sidebar

Twelve companies have formed a consortium to provide Europe with solar electricity.

The Desertec Industrial Initiative (DII) aims to provide 15% of Europe's electricity by 2050 or earlier via power lines stretching across the desert and Mediterranean sea.

The German-led consortium was brought together by Munich Re, the world's biggest reinsurer, and consists of some of country's biggest engineering and power companies, including Siemens, E.ON, ABB and Deutsche Bank.

It now believes the DII can deliver solar power to Europe as early as 2015.

from The Guardian: Solar power from Sahara a step closer.

The UK is not participating in the DESERTEC plan, and intends instead to build costly and dangerous new nuclear power stations
Posted by OpenEng at 19:12 No comments:

Engineers say they are pro nuclear power but would prefer to live near a windfarm
Professional Engineering, the journal of the Institution of Mechanical Engineers, asked its readers if the UK should plan for a larger amount of nuclear power: 82% of respondents said 'yes'. However in the same survey 59% said they would be uncomfortable with a nuclear power station a mile or so from their own home and only 36% would would be OK with it. However most (69%) were quite happy to live near a windfarm. [PE 29 July 2009]

Jobs in Ukraine
PE also reports that British engineers are helping to build a store for nuclear waste at Chernobyl, funded with £2.1 million from the UK government. What other industry is so dangerous that we have to pay to clean up the mess in other countries if they are unable or unwilling to do it themselves? [PE 9 September 2009]
Posted by OpenEng at 20:13 No comments:

Here's the latest crop of stories on Nuclear Power:

1) A 2007 nuclear leak at Sizewell A in Suffolk was discovered by luck and could have cased an airborne off-site release of radioactivity. It's only come to light now because of the Freedom of Information Act. (GW)

2) Robot under-water crawlers are to search the sea off the coast of Dounreay for up to 1500 potential radioactive fragments. Other specialist robots have also been built for use in dismantling parts of the reactor. This type of equipment doesn't come cheap. Thus the taxpayer is still obliged to spend large sums on a power station that closed 30 years ago. You can bet that these costs were not factored into the claimed cost of electricity back then. There must be a better way to provide employment in places like Dounreay than contaminating them with nuclear reactor waste.


3) The Finnish Nuclear and Radiation Safety Authority (STUK) has sent a letter to Areva, the French company building the Olkiluoto nuclear power plant, stating that they will shut down the power station site if Areva doesn’t fix problems in the plant’s automation systems.This is a potentially devastating, blow because one of the main selling points of the new reactor has been that its safety systems will work far better than those in current reactors. It is particularly important that they do because, as The Independent on Sunday reported in February, they will produce many times as much radiation that could be rapidly released in the event of an accident. See: http://www.independent.co.uk/environment/green-living/safety-threat-to-planned-nuclear-power-stations-1682293.html.

4) Reactor 2 at Oldbury nuclear power station has just been switched back on (according to Professional Engineering). This is the first time in 5 years that both reactors at the site have been working.
Posted by OpenEng at 21:42 No comments:

The nuclear reactor under construction in Finland is the 'EPR' design that the French power company EDF wants to build in the UK, and the one that the pro-nuclear UK government used as the basis of figures in its nuclear power consultation document. According to an article in Professional Engineering (October 2008) completion is now delayed by 3 years until 2012. When will governments learn that the world's 450 odd nuclear plants built over several decades are all one-off prototypes that can never be mass produced for a reliable and falling cost.

This brings us nicely to wind turbines which can and are mass produced in tens of thousands with falling costs .... but not in the UK. The UK cannot meet its targets for wind energy in part because of a world shortage of turbines (“UK wind farm plans on brink of failure” Observer, Sunday October 19 2008). Wartime Britain created industries and as recently as the 1970's the government's National Enterprise Board founded a successful semiconductor company (Inmos). Isn't it time therefore to establish a turbine manufacturer in the UK. If necessary it could be done via an agreement to licence an existing design or finance the creation of a UK subsidiary. I can already hear the howls of protest that governments shouldn't intervene in commerce ... oddly though, it seems to be perfectly acceptable for state owned EDF to buy UK power generators. And if the UK has to start from scratch, can it really be true that its engineers can build aircraft carriers, missiles and tanks for their government but are stumped by windmills?
Posted by OpenEng at 22:16 No comments: 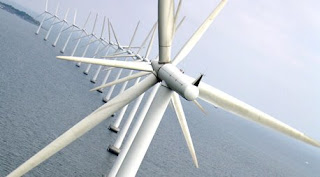 In Robin McKie's excellent description in the Guardian of how the Danish island of Samso has cut its carbon emissions by 140%, it says that to do the same in Britain would cost $1100bn and is therfore impractical. But is it? If we aim to cut 100% not 140%, we get a cost of £432bn. Next let's scrap a few of the government's more crackpot schemes: Heathrow 3rd runway (£13bn), motorway widening (£13bn), ID cards (£18bn), new nuclear (£48bn), clean-up of new nuclear (£80bn). Total £172bn. [Unfortunately the £20bn spent on the Iraq war and the £80bn we'll have to pay for clean-up of existing nuclear, is water under the bridge.] Spread the remaining £260bn over the lifetime of the renewables and we're down to say £13bn per year or about £500 per household .... that's about ten times less than we spend on motoring. But then household bills will go down because we no longer need fossil fuels or expensive nuclear. Following Samso's example or something like it, may well be the cheapest energy strategy on offer.
Posted by OpenEng at 09:47 No comments: 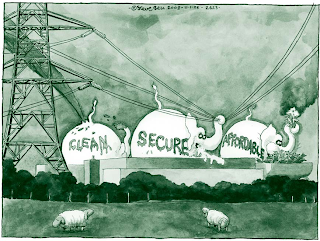 The report exposes fifty years of disastrous performance, failed technology and broken promises. It also highlights escalating bills to the taxpayer and a backlog of toxic waste. 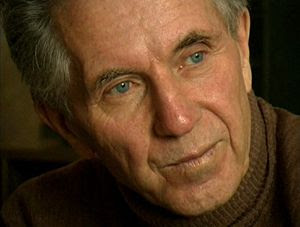 I learnt from a Guardian obituary that a brilliant Soviet scientist died this summer (25 August 2008). His work included the development of a mobile nuclear power station to be used to power missile launchers. Shortly after its completion his career took a different turn when the Chernobyl nuclear power station blew up in 1986. He flew over the burning atomic plant in a helicopter and in the middle of radioactive smoke, threw liquid nitrogen containers onto the reactor core. He survived but three others in the same helicopter died. He then began to study the effects of the radioactivity released by the accident and eventually founded the Belrad Institute to continue this work. Because of his activities, he lost his job and was threatened him with internment in a psychiatric asylum. He is quoted as saying: "The international nuclear lobby does not want to recognise the the scale of the disaster in our country because if it does, nuclear power will be finished".

His words add to the urgent warnings of many scientists and engineers who have come to the conclusion that nuclear power is unacceptably dangerous.
Posted by OpenEng at 21:06 No comments: